New products come out from time to time that are really worth purchasing.  I'm usually slow to try something new unless of course it is a bead.  It took me years to try a Bead on it Board.  I didn't believe the hype.  If you are wondering about one of the several beading boards now available, it is true!  They are worth the investment and I don't know why I waited so long.  But I digress.

In this case, a friend is selling the Super Snips, they are inexpensive which is a bonus and cute too.  So I figured I would try them.  Her ad says they cut Fire Line like it is butter.  Really?  Color me skeptical.

I have dozens of pairs of scissors.  I have purchased all kinds, from less expensive kids scissors to more expensive embroidery types.  I have also purchased a pair of rather expensive Xuron scissor type cutters and they do work very well on various lines and threads.  But I don't want to purchase several pair to have all over where I'm apt to be beading.    Ok, so I could be a little more organized.  Sorry, that isn't going to happen.

I travel a bit and prefer to use smaller less expensive scissors to pack.  You just never know when you are going to run into a TSA clerk having a bad day.

Typically scissors will just bend the line over if you try to just snip it off without maintaining some kind of tension on the line.  Also, as the various lines dull the scissors, it gets worse and worse.  I've tried to sharpen scissors without much success.  And if you are a fan of Power Pro line, one of the best lines to use for loads of crystals, it can be very hard to cut it with traditional scissors.

These little Super Snips are under $5.00.  Frankly, I did not expect that they would work.

At first, I cut as I normally do with a little tension on the line.  Then, as I used them over and over, I tried cutting without even holding the other end.  WOW I am a convert.  Ok, so I don't have much of a life outside beading, little things excite me. 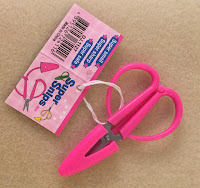 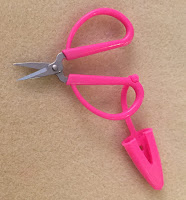 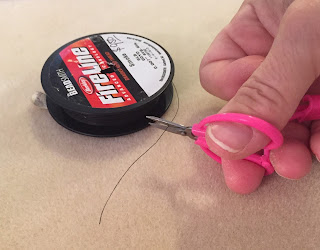 SO, I tried them on PowerPro both 8 and 10 pound, tried them on Nanofill, One G and other threads.  They snip the thread right off without holding the other end of the thread on all of them.  Pops off like magic.  I didn't believe it.  So I tried again figuring it was a fluke.  Best darn little thing I've ever seen.  The cute little cover to put on the tips is a bonus.

I'm not big on video but gave it a try to show how great they are.  The video is on YouTube and the Baubles by Balonis Facebook page as I could not get it to load on this blog.  Search Super Snips on YouTube and you will find it.

You can get the Super Snips at:  Beads by Dee

Marcia L. Balonis
My primary goal is to share my passion for beading with others by teaching and creating patterns. I love to travel to teach bead weaving or bead embroidery classes. Teaching at society retreats is a favorite event of mine. You can also find my patterns and kits in my Etsy shop - Baubles by Balonis. http://etsy.com/shop/baublesbybalonis